Marzieh Rahmani (2021-11-07). Iran tells Pakistan to use local currencies in mutual trade. en.mehrnews.com TEHRAN, Nov. 07 (MNA) — Iranian agriculture minister has said that barter trade with neighbors is one of Tehran's top policies, proposing the Pakistani side to use local currencies to solve problems resulting from the foreign sanctions on Tehran…

Morteza Ahmadi Al Hashem (2021-11-07). 16th Iran Intl. Auto Parts Exhibition kicks off in Tehran. en.mehrnews.com TEHRAN, Nov. 07 (MNA) — The 16th edition of the Iran International Exhibition of Auto Parts, Accessories and Assemblies was inaugurated at Tehran Permanent International Fairgrounds on Sunday in presence of Minister of Industry, Mine and Trade.

When Turkey first proposed its "3+3" format — the three South Caucasus states of Armenia, Georgia and Azerbaijan plus Russia, Turkey and Iran — last December, few thought anything of it. After all, since the Soviet collapse 30 years ago, the region had been largely Russia's back yard, with little space for other actors to …

sputniknews (2021-11-07). Iran Slams Assassination Attempt Against Iraqi PM, Says US May Have Been Responsible. sputniknews.com A booby-trapped drone targeted Iraqi Prime Minister Mustafa al-Kadhimi's residence in Baghdad early Sunday morning, with the leader emerging unscathed and calling on the public to remain calm. Iraq's interior ministry classified the incident as a "terrorist attack," and revealed that three drones were involved in the attack.

Kamal Iranidoost (2021-11-07). Closing ceremony of 9th Iran-Pakistan trade committee meeting. en.mehrnews.com TEHRAN, Nov. 07 (MNA) — At the end of the 9th session of the Joint Iran-Pakistan Trade Committee in Tehran on Sunday, the Iranian and Pakistani economic officials visited a car show in which Iran Khodro latest product 'Tara' was displayed.

Staff (2021-11-07). Solidifying Iran-Pakistan economic ties on agenda. en.mehrnews.com TEHRAN, Nov. 07 (MNA) — "Our perspective on the future of the Iran-Pakistan economic relations is that we should be able to merge the two countries' economies in line with the interest of our citizens," Abdul Razak Dawood said.

Staff (2021-11-07). Iranian general warns enemies not to test power of IRGC, Army. en.mehrnews.com TEHRAN, Nov. 07 (MNA) — Commander of the Khatam-al Anbiya Central Headquarters said that enemies should refrain from testing the strength of the Army and IRGC.

Staff (2021-11-07). 2,611 films submitted to Iran CinemaV√©rit√©. en.mehrnews.com So far 2,611 short, mid-length, and feature films have been submitted to participate in the national competition section of the 15th Iran International Documentary Film Festival (CinemaV√©rit√©).

sputniknews (2021-11-07). Trump Boasts 'No President Has Been Better Friend to Israel', Accuses Biden of 'Bowing Down' to Iran. sputniknews.com Last week, the former president let slip in an interview that "10 years ago, 15 years ago," Israel "literally owned Congress," and lamented that "today it's almost the opposite" thanks to progressive Democrats like representatives Alexandria Ocasio-Cortez and Ilhan Omar.

Staff (2021-11-07). 2,611 films submitted to Iran CinemaVérité. en.mehrnews.com So far 2,611 short, mid-length, and feature films have been submitted to participate in the national competition section of the 15th Iran International Documentary Film Festival (CinemaVérité).

Marzieh Rahmani (2021-11-07). US seeks to join Iraqi investigation on attack on PM. en.mehrnews.com TEHRAN, Nov. 07 (MNA) — US Department of State spokesperson Ned Price said that Washington strongly condemns the assassination attempt on the Iraqi Prime Minister, claiming that the country is ready to help Iraq with the investigation.

Zahra Mirzafarjouyan (2021-11-07). Methane burst at mine in Kazakhstan leaves 6 dead, 2 injured. en.mehrnews.com TEHRAN, Nov. 07 (MNA) — Six miners were killed and two sustained injuries in a methane eruption at a mine in the Karaganda Region in Kazakhstan, the country's emergency service said on Sunday.

Zahra Mirzafarjouyan (2021-11-07). Explosion heard in 'Abu Disher' area of Baghdad. en.mehrnews.com TEHRAN, Nov. 07 (MNA) — News sources reported the sound of an explosion was heard in the area of "Abu Disher" near the Al-Kadhimiya Mosque.

Staff (2021-11-07). Why drone attack on Iraqi PM residence suspicious? en.mehrnews.com TEHRAN, Nov. 07 (MNA) — After the protest of the Iraqi people against the election result, especially after the brutal events on Friday in Baghdad, the drone attack on the prime minister's residence is suspicious and requires deep consideration.

Marzieh Rahmani (2021-11-07). "US system did not work to deter attack on Iraqi PM house" en.mehrnews.com TEHRAN, Nov. 07 (MNA) — According to the Iraqi Joint Operations Command, the US embassy's C-RAM defense system was not activated during an assassination attempt against the Iraqi Prime Minister on Sunday morning.

TASS (2021-11-07). Bavaria's head vows to launch Nord Stream 2 as soon as possible. tass.com "We are withdrawing from coal and nuclear power generation, and the lack of resources is becoming more and more severe," he said…

teleSUR (2021-11-06). 'Saab's Case Is Wrong and Inconsistent', Lawyer Rivkin Says. telesurenglish.net Speaking in an interview offered to teleSur, attorney David Rivkin assured that Alex Saab's extradition was illegal and improper as the U.S. has no grounds to deny the Venezuelan official's diplomatic status. | RELATED: | Rivkin offered an update on the appeal proceeding being taken before the 11th Circut Court of Appeal in Florida. He remarked that the legal team holds Saab's Special Envoy to Iran status granted…
dummyvar2

Washington and other allied capitals have been abuzz with talk of nuclear submarines since the surprise announcement Some have raised legitimate concerns about the impact of the deal on nuclear non-proliferation. How to prevent myriad other countries from leaping…
dummyvar2 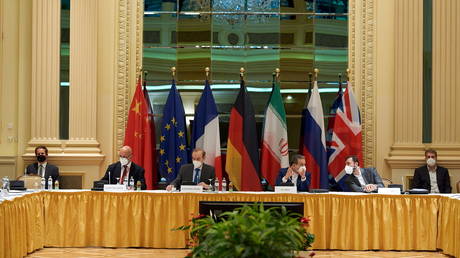 The US-snubbed multilateral agreement on Iran's nuclear program should be revived in its original form rather than replaced with a new deal, Moscow and Tehran say. | The position was reiterated during a phone call between Russian Foreign Minister Sergey Lavrov and his Iranian counterpart, Hossein Amir-Abdollahian. A readout from the Saturday exchange was published by the Russian Foreign Ministry. | "The sides have called for the restoration of the 'nuclear deal' in its original balanced configuration, as endorsed by the UN Security Council," the Russian statement said. | The sides confirmed that this is the on…
dummyvar2

TASS (2021-11-06). Iran's intention to return to nuclear deal should not be questioned, says foreign minister. tass.com The deal was aimed at overcoming the crisis regarding Tehran's nuclear program…
dummyvar2

Kamal Iranidoost (2021-11-06). Iran, China FMs discuss nuclear talks on phone. en.mehrnews.com TEHRAN, Nov. 06 (MNA) — Foreign ministers of Iran and China discussed issues of mutual interest and the resumption of "Vienna" talks on the revival of the JCPOA in a telephone conversation on Saturday.
dummyvar2

Kamal Iranidoost (2021-11-06). Several injured in German train stabbing attack: local media. en.mehrnews.com TEHRAN, Nov. 06 (MNA) — A knife attack in a German train has left at least three people injured, out of which two are being reported to be in critical condition but do not have life-endangering injuries.
dummyvar2

Marzieh Rahmani (2021-11-06). Iran to participate in India-hosted summit on Afghanistan. en.mehrnews.com TEHRAN, Nov. 06 (MNA) — Iran has confirmed its participation in the Regional Security Dialogue on Afghanistan which will be hosted by New Delhi on November 10, an Indian source reported.
dummyvar2

Marzieh Rahmani (2021-11-06). Over 93 mn doses of COVID vaccine injected in Iran. en.mehrnews.com TEHRAN, Nov. 06 (MNA) — The Iranian Health Ministry said that more than 93 million jabs of COVID-19 vaccines have been injected across the country.
dummyvar2