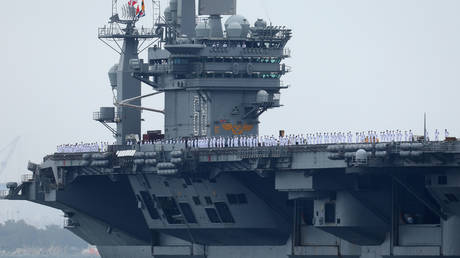 The USS Nimitz, the US Navy's only aircraft carrier currently deployed near the Persian Gulf, has been sent home just a day after two B-52 bombers were sent to the area — despite supposed 'chatter' about a coming Iranian attack. | Acting Defense Secretary Chris Miller announced the Nimitz would be heading back to its home port of Bremerton, Washington on Thursday, avoiding so much as a mention of Iran in his remarks — even as Washington and Tehran have traded threats and barbs for weeks ahead of the anniversary of Quds Force Major General Qassem Soleimani's killing by US airstrike. | Also on rt.com…

John Laforge (2021-01-01). Court Orders Veterans Affairs Department to Replace Flawed Science in Plutonium Disaster Case. counterpunch.org In a major class action ruling issued December 17, the US Court of Appeals for Veterans Claims in Washington, DC has ordered the Department of Veterans Affairs (VA) to re-examine how it evaluates disability claims from veterans exposed to deadly alpha radiation during cleanup operations following a disastrous nuclear weapons accident at Palomares, Spain. The

Mehr News Agency (2021-01-01). Iran fully ready to confront any US move in region: IRGC cmdr. en.mehrnews.com TEHRAN, Jan. 01 (MNA) — Chief Commander of the Islamic Revolutionary Guards Corps (IRGC) said that Armed Forces of the country is fully prepared to give a crushing response to any US anti-Iran move in the region.

Mehr News Agency (2021-01-01). Terror of Soleimani, testament to US ruinous role in region. en.mehrnews.com TEHRAN, Jan. 01 (MNA) — The Embassy of Islamic Republic of Iran in Norway issued a statement on Thu., stating that assassination of Iran's top commander Martyr Gen. Soleimani is a testament to US destructive role in the region.

Online News Editor (2021-01-01). US withdraws aircraft carrier from Middle East amid tensions with Iran. laprensalatina.com Washington, Dec 31 (efe-epa).- The Pentagon on Thursday said it was calling back its only navy aircraft carrier operating in the Middle East, in a move that surprised many observers because it would reduce United States' military power in the region amid escalating tensions with Iran. The decision comes as Washington fears that Iran may …

sputniknews (2021-01-01). Iran Tells IAEA It Plans to Push Uranium Enrichment Up to 20%, the Level Achieved Before JCPOA. sputniknews.com Under the deal reached between Iran with major powers in 2015, it could only enrich uranium up to 3.67 percent.

sputniknews (2021-01-01). IRGC Says Iran Has 'No Worries' About Any Foreign Adversary as US Carrier Group Heads Home. sputniknews.com On Thursday, the Pentagon announced that the carrier strike group led by the USS Nimitz, the sole US aircraft carrier in the Middle East, would be heading home following a deployment of nearly 10 months. The drawdown comes despite rising tensions between the US and Iran, and the recent deployment of US bombers and a missile sub to the region.

Philip Giraldi (2020-12-31). A New War in the New Year? Trump Again Takes Aim at Iran. globalresearch.ca One of the most perplexing narratives presented during the waning days of the administration of President Donald J. Trump is his apparent disengagement from dealing seriously or providing leadership regarding the surging Coronavirus while at the same time continuing an …

teleSUR (2020-12-31). Iranian Parliament Drafts a 'Retaliation Plan' Against the US. telesurenglish.net The project was prepared by a group of deputies of the Islamic Consultative Assembly of Iran (Mayles) on the occasion of the first anniversary of the martyrdom of Lieutenant General Qasem Soleimani and the fortieth day after the assassination of the prominent physicist Mohsen Fajrizade, according to local media reports on Thursday. | RELATED: | The "Plan of retaliation against the United States, the main author of the assassination…

news.un (2020-12-31). Iran execution of child offender breaks international law: UN rights office. news.un.org The execution of an Iranian man for a crime allegedly committed when he was 16 years old has been condemned by the UN Human Rights Office (OHCHR) and raised concerns over violations of his right to a fair trial.

Mehr News Agency (2020-12-31). Nations of region not to forget sacrifice of martyr Soleimani. en.mehrnews.com TEHRAN, Dec. 31 (MNA) — Iranian Embassy to Croatia said that regional countries will not forget the bravery and sacrifices of former IRGC Quds Force Commander Martyr Lt. Gen. Soleimani who played a key role in the fight against terrorism.

Mehr News Agency (2020-12-31). Trump admin. suffers another defeat at end of 2020: Envoy. en.mehrnews.com TEHRAN, Dec. 31 (MNA) — Iranian Ambassador to UK Hamid Baeedinejad said that the Trump administration sustained another setback at the end of the year 2020.

Mehr News Agency (2020-12-31). 'Fear of revenge not leaving US alone'. en.mehrnews.com TEHRAN, Dec. 31 (MNA) — Iranian Army's first-in-command says the revenge for the US's assassination of General Soleimani is not over yet.

Anya Parampil (2020-12-30). An exclusive look inside Iran's supermarket in Venezuela. thegrayzone.com Red Lines host Anya Parampil visits Megasis, an Iranian supermarket which recently opened in Caracas, Venezuela, and explores cooperation between Tehran and Caracas against the US economic blockade. The Grayzone's Anya Parampil provides an exclusive look inside a superstore which the US government and corporate media have condemned and attempted to link to Iran's Islamic Revolutionary Guard Corps. She also speaks with Venezuelan Foreign Minister Jorge Arreaza about how increased cooperation between Tehran and Caracas is improving the material …

South Front (2020-12-30). Video: Russia Suffers Casualties in Greater Idlib. Israeli Air Force Strikes Damascus Countryside. globalresearch.ca On the morning of December 30th, warplanes of the Israeli Air Force once again carried out strikes on alleged Iranian targets in the countryside of Damascus. According to reports one person was killed and 3 others injured in the attack….

teleSUR (2020-12-30). Yemen: At Least 27 Killed As Explosions Target New Government. telesurenglish.net The ministers were not injured, and an Al Arabiya correspondent indicated that the explosion was accompanied by subsequent gunfire. | Yemeni Information Minister Muammar al-Eryani stated through his personal Twitter account that "the cowardly terrorist attack" was carried out by "the Iranian-backed Huthian militia." | RELATED: | For its part, Sky News Arabia quotes its correspondent and reports that two explosions…

_____ (2020-12-30). Iraq: 'British Company G4S Implicated In Assassination Of Soleimani'. popularresistance.org An Iraqi politician accused the UK private security company G4S of being involved in the assassination of Iranian Lieutenant General Qasem Soleimani. | The commander of the Quds Force of the Corps of Guardians of the Islamic Revolution (IRGC) of Iran, Lieutenant General Qasem Soleimani, and the deputy commander of the Popular Mobilization Units of Iraq (Al-Hashad Al-Shabi in Arabic), Abu Mahdi Al-Muhandis, were martyred on January 3 in a drone strike perpetrated by the US in Baghdad, the capital of Iraq. | This Monday the leader of the Iraqi political party Asaib Ahl al-Haq, Qais Al-Jazali, accused the British co…

teleSUR (2020-12-30). British Company Was Involved in Soleimani Killing, Iran Holds. telesurenglish.net Tehran prosecutor Ali Alqasi Mehr on Wednesday stated that the British security company G4S was involved in the assassination of the Revolutionary Guard Commander Qasem Soleimani. | RELATED: | This company, which handled the security of the flight in which the Persian general was traveling, informed the attackers about the arrival of his plane in Baghdad. | From Germany, the U.S. Ramstein Air Base also provided data…