Juan Cole (2021-06-21). Far Right Israeli PM Bennett slams Iran Nuclear Talks for Tehran's Poor Rights Record (Israel has 200 Nukes and has Killed Thousands of Occupied Palestinians). juancole.com Ann Arbor (Informed Comment) — New extreme-right Israeli Prime Minister Naftali Bennett came out on Sunday to argue that the election of an extreme-right Iranian cleric (Ebrahim Raisi) as president of that country should cause the Biden administration to back off reviving the 2015 Iran nuclear deal. Bennett called Raisi the "hangman of Tehran" and …

Michael (2021-06-21). What does election of hard liner Raisi in Iran mean for Mideast Flashpoints? zcomm.org Please Help ZNet Source: Informed Comment Former chief justice of the Iranian judiciary, Ebrahim Raisi, won the presidential election, as expected, with over 60 percent of the votes. The problem was that less than half of eligible voters bothered to come out to the ballot box. The clerical establishment had so 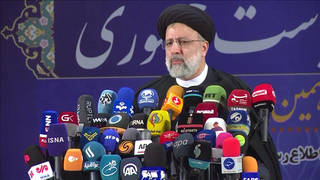 Hard-line cleric Ebrahim Raisi won the Iranian presidential election with about 62% of the vote. Raisi has headed Iran's judiciary since 2019 and is seen as a protégé and possible successor of Supreme Leader Ayatollah Ali Khamenei. Turnout in the election was just 49% — the lowest since the 1979 Iranian revolution — and dozens of candidates were barred from running in the election, including former President Mahmoud Ahmadinejad. Raisi appears to "have higher ambitions than just [the] presidency," says Nega Mortazavi, an Iranian American journalist and host of "The Iran Podcast." "He is preparing to be…

Kamal Iranidoost (2021-06-21). Serbia president congratulates Raeisi on victory in election. en.mehrnews.com TEHRAN, Jun. 21 (MNA) — President of Serbia Aleksandar Vuƒçiƒá has sent a message to Iran's president-elect Ebrahim Raeisi to offer congratulations to him on his victory in the Friday presidential elections in Iran.

Morteza Ahmadi Al Hashem (2021-06-21). Iran nuclear talks won't be open-ended: European diplomats. en.mehrnews.com TEHRAN, Jun. 21 (MNA) — European troika diplomats in a note to the media on Mon. stressed that talks to revive the Iran nuclear deal, JCPOA, could not be stalled and that the most difficult issues in Vienna talks has not yet been resolved.

Staff (2021-06-21). Iran ready to host 1st meting of "3+3" regional countries. en.mehrnews.com TEHRAN, Jun. 21 (MNA) — Iran's Ambassador to Azerbaijan announced that Tehran is ready to host the 1st meeting of the presidents or ministers of 3+3″ (Russia, Iran, and Turkey, plus 3 Caucasus countries – Azerbaijan, Georgia, and Armenia) countries.

Morteza Ahmadi Al Hashem (2021-06-21). US insists on not-fulfilling its commitments under JCPOA. en.mehrnews.com TEHRAN, Jun. 21 (MNA) — According to available data, after the end of six rounds of nuclear talks between Iran and P4+1 in Vienna, United States continues to insist on not fulfilling its JCPOA obligations.

ŸÖÿ±ÿ∂€åŸá ÿ±ÿ≠ŸÖÿßŸÜ€å (2021-06-21). Kowsari elected as Tehran representative in Parliament. en.mehrnews.com TEHRAN, Jun. 21 (MNA) — Ismail Kowsari was elected as the representative of the people of Tehran in Iran's parliament, gaining 346,645 votes, a spokesman for the Tehran election office said. Illustrative image | On June 19, a helicopter en route from the Ahmad Fadaleh area of Dezful crashed near Dezful, Iran. | One of the passengers, who reportedly was a security guard, was killed and 11 others were injured in the accident. | #BREAKING #news #bell214 #boeing Morning Star (2021-06-21). Communists call for united struggle after executioner Ebrahim Raisi takes Iranian presidency. peoplesworld.org 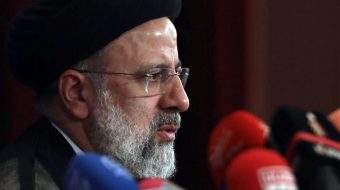 Iranian Communists called for a united struggle of all progressive forces after the Friday election of the "bloodstained" candidate Ebrahim Raisi as the country's next president in a widely boycotted poll. The Tudeh Party of Iran (TPI) said in a statement that the turnout in the election, the lowest in the history of the Islamic …

teleSUR (2021-06-21). The US Downplays Impact of Iran's New President on Nuclear Deal. telesurenglish.net On Sunday, the U.S. National Security Advisor Jake Sullivan downplayed the impact of Iran's President-Elect Ebrahim Raisi on Tehran's decision over the nuclear deal. | RELATED: | "Whether the president is person A or person B is less relevant than whether their entire system is prepared to make verifiable commitments to constrain their nuclear program," Sullivan said in an interview with ABC News when asked about the implication of Raisi's election.

Ryan Costello (2021-06-21). US Hawks Push Hardline Presidential Candidate in Iran. globalresearch.ca Visit and follow us on Instagram at

Barry Sheppard (2021-06-21). United States: The Biden-Putin meeting and the nuclear threat. greenleft.org.au The United States and Russia have agreed to discuss the control of nuclear weapons, reports Barry Sheppard, but the expansion of NATO and US imperialist interests may block any meaningful outcome.

Progressive Iran-watchers on Saturday reacted to the Al Ja…

Jason Ditz (2021-06-20). US Looks to Increase Anti-Iran Military Cooperation. news.antiwar.com Israeli Army Chief Aviv Kohavi is reporting that the US is Israeli officials are reporting this increased coordination is coming with CENTCOM, and has been ongoing for the last two months, just as the Biden Administration has been negotiating on a nuclear deal with Iran. | Kohavi and other Israeli officials are reportedly keen on using this increased cooperation,…