Dave DeCamp (2021-05-05). US Visits to Middle East Fuel Speculation Over Iran Deal. news.antiwar.com Although Biden officials are downplaying the progress made by indirect negotiations with Iran aimed at reviving the nuclear deal, a wave of diplomatic activity and US visits to the Middle East is Several US officials

The Associated Press (2021-05-04). Mexico's Zapatistas to Visit Spain 500 Years After Conquest. latinorebels.com ALTAMIRANO, Mexico (AP) — The Indigenous rebels of the Zapatista movement said last week that they are planning to send a delegation by canoes on a trip to "invade" Spain in May and June as Mexico marks the anniversary of the 1519-1521 Spanish Conquest.

Medea Benjamin, Marcy Winograd (2021-05-04). Squad & Co: Unite as a block to downsize Biden's military budget. nationofchange.org This is the moment to demand a substantial cut in military spending that defunds new nuclear weapons.

Medea Benjamin (2021-05-04). Squad & Co: Unite as a Block to Downsize Biden's Military Budget. zcomm.org This is the moment to demand a substantial cut in military spending that defunds new nuclear weapons…

Ahmed Abdulkareem (2021-05-04). Houthi Advances and Secret Saudi-Iranian Talks Prompt New Conciliatory Tone from Saudis. mintpressnews.com Bin Salman's half-hearted appeal for peace, which allegedly included demands that the Houthis drop their alliance with Iran and abandon support for the Palestinian cause, did little to convince Ansar Allah's leadership to ease the pressure on the Kingdom.

Ricard Falk: The humane and competently handled responses that the Biden presidency has pursued with respect to the COVID challenge, mitigating economic burdens on the poor, empathy for abuses of persons of color, and moves toward proposing a massive infrastructure program are uplifting changes in policy and leadership of the country, especially welcomed after enduring 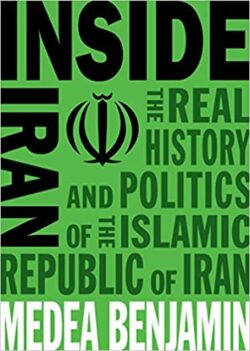 Photo credit: ICAN (International Campaign to Abolish Nuclear Weapons) Imagine this scenario: A month before the vote on the federal budget, progressives in Congress declared, "We've studied President Biden's proposed $753 billion military budget, an increase of $13 billion from Trump's already inflated budget, and we can't, in good conscience, support this." Now that would … Russian peacekeepers in the Nagorno-Karabakh region. Source: Stanislav Krasilnikov/TASS | Two new strongholds of the 102nd Russian military base in the Syunik region, bordering on Azerbaijan and Iran, in the south of Armenia. The announcement was made by Prime Minister of Armenia Nikol Pashinyan on May 3."This is an additional security guarantee not only for the Syunik region but for Armenia," Pashinyan was quoted as saying. | "The external security system of Armenia was not changed either before the war…

sputniknews (2021-05-04). Iran, US 'May Be Nearing' Nuclear Deal as Vienna Talks Continue Amid 'Flurry of Diplomatic Contacts'. sputniknews.com Last week, Iranian media outlets claimed Tehran and Washington had reached an agreement in principle on lifting the majority of US sanctions against the Islamic Republic.

sputniknews (2021-05-04). Swiss Foreign Ministry Confirms Female Diplomat's Death 'in a Fatal Accident' in Tehran. sputniknews.com Earlier on Tuesday, the semi-official Iranian news agency ILNA reported that the 52-year-old was the second-highest ranked employee at the Swiss Embassy in Tehran, living on the 18th floor of the building from which she fell to her death.

Staff (2021-05-04). MP calls on Iranian negotiators to adhere Leader's guidelines. en.mehrnews.com TEHRAN, May 04 (MNA) — Chairman of the Iranian Parliament's National Security and Foreign Policy Committee called on the Iranian negotiation team to put the guidelines of the Leader on their agenda in the Vienna talks so as to achieve results.

Staff (2021-05-04). Briefing on Iran's daily developments. en.mehrnews.com TEHRAN, May 04 (MNA) — The following are the Islamic Republic of Iran's latest developments in the last 24 hours.

Staff (2021-05-04). Borrell urges on seizing chance to advance US return to JCPOA. en.mehrnews.com TEHRAN, May 04 (MNA) — The EU Foreign Policy Cheif stressed the need to use the current opportunity to advance towards the return of the US to the JCPOA while referring to an important discussion about Iran at the G7 summit in London.

Staff (2021-05-04). 51-year-old Swiss embassy staff falls from a tower in Tehran. en.mehrnews.com TEHRAN, May 04 (MNA) — According to the spokesman of Iran's National Emergency Medical Service Organization, a 51-year-old woman fell from a tower in the Kamranieh neighborhood, Northen Tehran.

Staff (2021-05-04). An armed band dismantled by IRGC in E Iran. en.mehrnews.com TEHRAN, May 04 (MNA) —According to the public relations of the IRGC's Quds base, a band of armed miscreants has been dismantled in Sistan and Baluchestan province.

Dave DeCamp (2021-05-04). US Officials in Middle East to Tamp Down Concern Over Iran Deal. news.antiwar.com With the Biden administration engaged in talks that could revive the Iran nuclear deal, US allies in the Middle East that are against the agreement are concerned. Besides Israel, Arab allies like the UAE and Saudi Arabia are also opposed to a revival of the JCPOA. | To tamp down these concerns

_____ (2021-05-04). Nuclear Climate Change: Washington Heats Things Up. strategic-culture.org We have been moved yet another step closer to planetary destruction, Brian Cloughley writes. | On April 29 Tom Engelhardt, a respected commentator on world affairs, published a

Staff (2021-05-04). Vienna talks making progress: Ulyanov. en.mehrnews.com TEHRAN, May 04 (MNA) — "In real life the talks are making progress", Russia's Permanent Representative to International Organizations in Vienna said, criticizing some reports and comments about the lack of progress in the nuclear talks.

Staff (2021-05-04). Condolences on martyrdom anniv of Imam Ali epitome of justice. en.mehrnews.com TEHRAN, May 04 (MNA) —The 21st day of Islamic fasting month of Ramadan coincides with the martyrdom anniversary of First Imam of Shia Muslims Ali ibn Abu Talib (BPUH), the cousin and son-in-law of the Prophet Muhammad (S).

Staff (2021-05-04). Casualties of Riyadh-affiliated forces in Ma'rib hit 120. en.mehrnews.com TEHRAN, May 04 (MNA) — Supported by Saudi-led coalition, the forces of the resigned Yemeni government launched an operation in Ma'rib, however, they faced a heavy defeat.

Staff (2021-05-04). Collapse of train bridge kills 15, injures 70 in Mexico City. en.mehrnews.com TEHRAN, May 04 (MNA) — A metro train bridge has collapsed in the Mexican capital, claiming the lives of at least 15 people and wounding up to 70, according to the local authorities.

Staff (2021-05-04). 19 dead, 846 injured in days-long Colombia protests. en.mehrnews.com TEHRAN, May 04 (MNA) — The office of Colombia's human rights ombudsman said 18 civilians and a police officer died in violence during the protests that began throughout the country on April 28, while 846 people, including 306 civilians, were injured.

Staff (2021-05-04). ISIL postman arrested by Iraqi intelligence forces in Kirkuk. en.mehrnews.com TEHRAN, May 04 (MNA) — Officers from the National Intelligence and Investigation Agency under the Iraqi Ministry of Interior have arrested the leader of one of the detachments belonging ISIL terrorist group.

Staff (2021-05-04). US logistic base targeted near Kuwait-Iraq border. en.mehrnews.com TEHRAN, May 04 (MNA) — A US military base used for maintaining military equipment has been targeted near the Iraq-Kuwait crossing border.

Staff (2021-05-03). Leader to deliver speech on Intl. Quds day. en.mehrnews.com TEHRAN, May 03 (MNA) — The Leader of Islamic Revolution Ayatollah Khamenei will deliver a speech on the occasion of the International Quds Day, which falls on May 7.

sputniknews (2021-05-03). Iran Remains 'Primary State Challenger' to Washington's Interests in Mideast, US Intel Report Claims. sputniknews.com Tensions between Tehran and Washington have been simmering since America's unilateral withdrawal from the 2015 Iran nuclear deal in May 2018. Kamal Iranidoost (2021-05-03). Iran blocks entry of 5,000 foreigners from eastern borders. en.mehrnews.com TEHRAN, May 03 (MNA) — The deputy head of Iran's Police Brigadier General Ghasem Rezaei said that as many as 5,000 foreign passengers were prevented from entering the country from the eastern borders amid Covid-19 cases surge in India.

Staff (2021-05-03). Iran to produce 7mn doses of COVID-19 vaccine as of Oct.-Nov. en.mehrnews.com TEHRAN, May 03 (MNA) — Head of Pasteur Institute of Iran Alireza Biglari announced that seven million doses of coronavirus, COVID-19, vaccines will be produced as of Iranian months of Mehr and Aban (falls on Oct.-Nov.) in the current year.