Yanis Iqbal (2021-04-26). The Balance of Forces in Syria. orinocotribune.com By Yanis Iqbal — Apr 24, 2021 | Russia, Iran and Syria have established a mission aimed at securing a safe and stable flow of oil supplies, wheat and some other materials to Syria via the Mediterranean. The mission's work is to secure multi-sided coordination to secure the arrival of oil in the first place, especially after the fuel crisis that is the largest that Syria has witnessed in decades. | After intensive meetings, the three countries approved a mechanism for Russian warships to escort Iranian oil tankers coming to Syria, as soon as they reach the Mediterranean gate of the Suez Canal, and until they…

teleSUR (2021-04-26). US Attitude Hinders Nuclear Deal Talks in Vienna. telesurenglish.net Iran's Foreign Affairs Ministry spokesman Said Khatibzade on Monday asserted that if the United States does not demonstrate sufficient political will, his country will abandon talks to revive the 2015 Joint Comprehensive Plan of Action (JCPOA), a nuclear deal signed in 2015 by Iran, Germany, France, the United Kingdom, China, Russia, and the United States. | RELATED: | "We have no interest in long or attrition dialogues," Khat…

Shivan Mahendrarajah (2021-04-26). The Iranian Government is more Pragmatic in dealing with Sunnis than its Sectarian image Implies. juancole.com 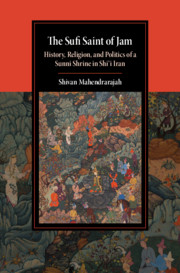 St. Andrews (Special to Informed Comment) — The government of the Islamic Republic of Iran is often depicted by its enemies and their press (the United States, Saudi Arabia and Israel in particular) as an ideological and sectarian Shiite state, drunk on fundamentalism. Religious fundamentalism, however, is a key part of the politics of these …

The Canary (2021-04-26). 'Urgent explanation' is demanded as Nazanin Zaghari-Ratcliffe sentenced to a another year in Iranian jail. thecanary.co British-Iranian charity worker Nazanin Zaghari-Ratcliffe has been given an additional jail term in Iran. | Zaghari-Ratcliffe has already completed a five-year sentence on charges levied by Iranian authorities, the last year of which was spent under house arrest due to the pandemic. | Her lawyer Hojjat Kermani said she received the second sentence on a charge of spreading "propaganda against the system" for participating in a protest in front of the Iranian Embassy in London in 2009. | As well as the one-year jail term she has also been banned from leaving the country for a year. | Thank you for all the messages r…

Staff (2021-04-26). Saudis in dire need of talk with Iran: Ex-envoy to Qatar. en.mehrnews.com TEHRAN, Apr. 26 (MNA) — Stating that Saudi Arabia is facing many security and economic problems, former Iranian ambassador to Doha said that Saudis cannot survive in the region without the Islamic Republic of Iran.

Mehr News Agency (2021-04-26). Iran-Cuba vaccine tested on 5 volunteers. en.mehrnews.com TEHRAN, Apr. 26 (MNA) — The first doses of the joint vaccine of the Pasteur Institute of Iran and the Finlay Institute of Cuba were injected into 5 volunteers.

Jason Ditz (2021-04-26). Iran Military Chief Threatens Retaliation for Israeli Action. news.antiwar.com In comments to reporters on Sunday, Iranian military Chief of Staff Gen. Mohammed Bagheri warned Israel should not believe that it can carry out attacks on targets inside Syria without repercussions, Talk of retaliation comes in the wake of incidents in the past several days seeing Israel attack a number of targets in south Syria, and a presumptive Israeli attack on an Iranian fuel tanker just off the Syrian coast. | Gen. Bagheri…

IPS (2021-04-26). US-China Cold War Could Lead To A More Dangerous Nuclear Stand-Off — OpEd. eurasiareview.com By Joseph Gerson* | Despite the negotiation of the Treaty on the Prohibition of Nuclear Weapons (TPNW), we are confronted by the increasing dangers of great power war, even nuclear war. | Instead of making necessary investments to ensure public health, reverse climate change and ensure the security of their peoples, trillions of dollars are being wasted to construct new nuclear weapons and their delivery systems, including new hypersonic delivery systems. | The U.S. and Russia are the lead drivers of this race to annihilation, with more than 90% of the world's nuclear weapons. The U.S. is in the process of upg…

Staff (2021-04-26). Sana'a announces release of more than of its 20 inmates. en.mehrnews.com TEHRAN, Apr. 26 (MNA) — The Head of Yemeni National Committee for Prisoners Affairs announced that 22 prisoners from Yemeni Army and Popular Committees have been released in a process of swapping prisoners with the Saudi coalition.

Staff (2021-04-26). Hamas leader warns Zionists over recent unrests in Quds. en.mehrnews.com TEHRAN, Apr. 26 (MNA) — Head of political Bureau of Palestinian Islamic Resistance Movement (Hamas) said that if the Zionist enemy continues its hostile policy against Quds, there will be no calm.

Mehr News Agency (2021-04-26). MI6 'green spying' on China & other nations. en.mehrnews.com TEHRAN, Apr. 26 (MNA) — British agents are monitoring the world's largest polluters, particularly China, to ensure that they are honoring their international commitments regarding the environment.

Mehr News Agency (2021-04-26). Putin-Biden summit planned for summer: Kremlin. en.mehrnews.com TEHRAN, Apr. 26 (MNA) — The summit between Russian and US Presidents Vladimir Putin and Joe Biden is planned for summer but its precise date and location will still have to be agreed, Kremlin spokesman Dmitry Peskov told reporters Monday.

Mehr News Agency (2021-04-26). Muslims, non-Muslims enjoying Ramadan festivities in Lebanon. en.mehrnews.com TEHRAN, Apr. 26 (MNA) — Since Ramadan, like Christmas, is regarded as a national occasion in Lebanon; its festivities are en ≠joyed and celebrated by all Muslims and non-Muslims in this country.

Tasnim News Agency (2021-04-25). Iran Foreign Ministry Dismisses Ex-Oil Minister's Comments On Helping Yemen. eurasiareview.com The Iranian Ministry of Foreign Affairs denied the recent comments from Rostam Qassemi, a former oil minister, in an interview with Russia al-Youm about the Islamic Republic's military assistance to Yemen and the presence of Iranian military advisers in the Arab country. | In the statement released on Friday, the Foreign Ministry said the comments published in the Wednesday interview are contrary to the reality and policies of the Islamic Republic of Iran in Yemen. | The ministry emphasized that only the official authorities are eligible to declare Tehran's stances, adding, "Iran's support for Yemen is of poli…

Cyrus Yaqubi (2021-04-25). Two Different Perspectives For Preservation And Survival Of Islamic Republic Of Iran — OpEd. eurasiareview.com Iran is in its worst economic situation in 42 years, and the threat of a widespread uprising that may lead to the regime's overthrow has become more serious than ever. When Khomeini was alive, no authority dared to dispute his orders and decisions, and everyone had to obey him. In today's Iran, Khamenei still has the final say on all internal and international matters. But unlike Khomeini, he has not been able to keep all political factions in Iran at bay. | Although Khamenei has not wasted a moment in suppressing its opponents, even those very close to him and his ideas, such as, one of Iran's former Prime Mi…

Hudson Institute (2021-04-25). Holding Iran Accountable: The Importance Of Maintaining Sanctions Leverage — Analysis. eurasiareview.com By Robert Greenway* | The leverage gained through economic sanctions has once again brought Iranian leadership to the negotiating table in Vienna—but that is not the end of sanctions' utility. This leverage will be essential to secure the longer and stronger1 deal nearly everyone agrees is required to effectively prevent the Islamic Republic from getting a nuclear weapon. In fact, absent these sanctions such a deal is practically impossible to envision. Lifting sanctions before validating the change in behavior that required them in the first place endangers our national security, undermines the legitima…

Staff (2021-04-25). Zionist Israeli delegation to depart for DC for talks on Iran. en.mehrnews.com TEHRAN, Apr. 25 (MNA) — A delegation from the Israeli regime will travel to the US on Monday without the participation of the Chief of General Staff Aviv Kohavi.

Kamal Iranidoost (2021-04-25). Zionist plots in Quds to get nowhere: Hamas. en.mehrnews.com TEHRAN, Apr. 26 (MNA) — The Palestinian resistance movement Hamas issued a The Iranian health official also rejected claims on the existenc on Sunday in reaction to recent developments in holy Quds, saying that Zionist plots in Quds will be defeated.

Staff (2021-04-25). Turkey summons US envoy over Biden statement. en.mehrnews.com TEHRAN, Apr. 25 (MNA) — The Turkish Foreign Ministry summoned US ambassador to Turkey in a protest to the US decision in recognizing "Armenian genocide", stating that US president Joe Biden's claims in this regard are 'baseless, worthless'. Click to see full-size image | On April 23, a solemn ceremony was held at the naval base in Sanya (Hainan island), in China. Three major vessels were commissioned into the People's Liberation Army Navy (PLAN) fleet. The destroyer "Dalian", the landing helicopter dock (LHD) "Hainan" and the strategic nuclear submarine (SSBN) Changzheng-18 were placed on active service. | The commissioning ceremony was attended by Chinese President Xi Jinping, also general secretary of the Communist Party of China Central Committe…

Staff (2021-04-25). Palestinians demonstrate in support of Al-Aqsa in Gaza Strip. en.mehrnews.com TEHRAN, Apr. 25 (MNA) — Residents of the Gaza Strip have reportedly staged large-scale rallies against Zionist security forces in the border areas, so as to support the Palestinian resistance in the occupied city of Jerusalem Al-Quds…

Arab News (2021-04-25). How Iran Made Itself A Haven For Israeli Spies — OpEd. eurasiareview.com By Baria Alamuddin* | There's nothing new in Iran's paranoid ayatollahs seeing spies, saboteurs and enemies under every rock. But their recent paranoia may be well founded, as the Iranian parliament and media accuse their leaders of allowing the nation to be turned into a "haven for spies," while openly wondering about the extent of infiltration of the state's nuclear and intelligence apparatuses. | Iranian officials fear that a substantive clandestine Israeli sabotage network is operating with impunity throughout the Islamic Republic, staging assassinations and attacks against strategically sensitive sites, a…

Kamal Iranidoost (2021-04-25). Kata'ib Hezbollah calls on Al-Kadhimi to resign. en.mehrnews.com TEHRAN, Apr. 25 (MNA) — The resistance group Kata'ib Hezbollah have called Mustafa Al-Kadhimi's government to resign after a tragic incident in a hospital in Baghdad that killed dozens and injured many more.