Gareth Porter (2020-06-22). Israel leverages dubious 'Nuclear Archives' to secure new IAEA demands on Iran. thegrayzone.com The International Atomic Energy Agency has once again lent itself to the political interests of the United States and Israel,…

sputniknews (2020-06-22). Netizens Enraged as Full Page Tennessee Newspaper Ad Declares 'Islam' Will 'Detonate Nuclear Device'. sputniknews.com The published ad was paid for by a religious group referring to itself as "Ministry of Future for America", who defined their mission "to proclaim the final warning message" of the Christian Bible.

en.mehrnews (2020-06-22). Impressive Zomorrod waterfall in N Iran. en.mehrnews.com HAVIQ, Jun. 22 (MNA) — Located some 9km south of Haviq city in Gilan province, Zomorrod Waterfall bestows tranquility to tourists. There are two waterfalls in the area with the larger one having a 15m height and a smaller one having a 12m height with stair-like appearance. These are also being referred to as 'Twin Waterfall'.

en.mehrnews (2020-06-22). China not to support resolution that escalates tension: spox. en.mehrnews.com TEHRAN, Jun. 21 (MNA) — In response to IAEA anti-Iranian resolution, Chinese Foreign Ministry spokesman said that China does not support a resolution that would increase tensions.

en.mehrnews (2020-06-22). NPC plans to diversify butane chain items. en.mehrnews.com TEHRAN, Jun. 22 (MNA) — The first project in the butane chain in Mahshahr will be ready for operation with the aim of commercial production of three important and new items, parallel with planning for realization of the second petrochemical leap in Iran. 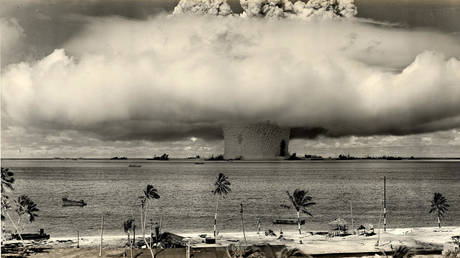 The Tennessean has found themselves in hot water on social media and apologizing following a paid advertisement in their newspaper promising Islam will drop a nuclear bomb on the city of Nashville on July 18. | "Dear citizens of Nashville," the full-page ad read. "We are under conviction to not tell you but provide evidence that on July 18, 2020, Islam is going to detonate a nuclear device in Nashville, Tennessee." | Included above the text is an image of President Donald Trump and Pope Francis with burning US flags behind them. In small print above the image is the label "paid advertisement." | The text is s… 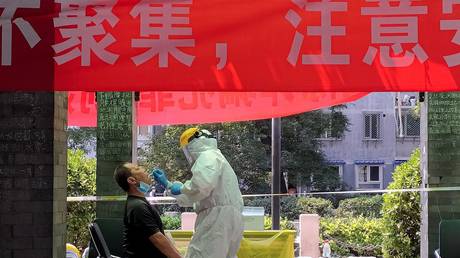 Unfazed by the lack of evidence, White House trade advisor Peter Navarro went on accusing China of creating Covid-19, possibly even purposefully, as he was grilled about the US readiness for the pandemic. | Asked by CNN's Jake Tapper what the president and his team are doing to prepare for a potential second wave of the coronavirus, Navarro quickly launched into a diatribe about China. | "China created this pandemic," he said. "They hid the virus. They created that virus. And they sent over hundreds of thousands of Chinese citizens here to spread that around and around the world," he said. "Whether they did th…

yenisafak (2020-06-21). 13-year-old girl killed amid gunfire at Kashmir border. yenisafak.com A 13-year-old girl was allegedly killed in Pakistani-administered Jammu and Kashmir on Sunday in an exchange of gunfire along the border with the Indian-administered side of the region, according to the Pakistani military.Amid heightened tensions between the South Asian nuclear rivals, the Pakistani Army accused Indian border forces of targeting civilians on the Pakistani side of the disputed Kashmir valley, claiming that the girl's mother and a 12-year-old boy were also injured due to "indiscriminate" fire."Indian Army Troops initiated unprovoked ceasefire violation in Hajipir and Bedori Sectors along LOC [Line…

en.mehrnews (2020-06-21). Parl. National Security Commission mulls over IAEA BoG's resolution against Iran: Spox. en.mehrnews.com TEHRAN, Jun. 21 (MNA) — Spokesman for the Parliament National Security and Foreign Policy Commission Abolfazl Amouei said that the Commission in its first meeting mulled over the illegal resolution issued by the Board of Governors [BoG] of the International Atomic Energy Agency [IAEA] against the Islamic Republic of Iran.

en.mehrnews (2020-06-21). Iran to start holding exhibitions as of July 2: IIEC. en.mehrnews.com TEHRAN, Jun. 21 (MNA) — The Chief Executive of Iran International Exhibitions Company [IIEC] said on Sunday that both domestic and foreign exhibitions will be held in the country from July 2 according to the scheduled program.

en.mehrnews (2020-06-21). Iran calls for urgent clarification of judge Mansuri's cause of death. en.mehrnews.com TEHRAN, Jun. 21 (MNA) — Inviting Romanian ambassador to Iranian foreign ministry in Tehran, the Islamic Republic called for Romania to announce the cause of death of the Iranian judge Golamreza Mansouri as soon as possible.

_____ (2020-06-21). Nuclear Rivals Clash in the Himalayas. strategic-culture.org Eric MARGOLIS | Last week, the world's most populous nations, India and China, both nuclear armed, clashed in the high Himalayan region of Ladakh. | At least 20 Indian troops died and 12 were reportedly taken prisoner before a cease-fire went into effect. So far, there were no reports of Chinese casualties. | Ladakh is one of the world's most remote, obscure and inhospitable places, a plateau averaging 4,200 meters altitude (about 14,000 feet) with frigid temperatures, scant oxygen, little rainfall, and howling winds. This bleak moonscape has long been called 'Little Tibet' because of its semi-nomadic ethnic Tibe…

Sharmila Devi (2020-06-20). [World Report] COVID-19 resurgence in Iran. thelancet.com Iran was one of the first countries to experience a COVID-19 epidemic, and began relaxing restrictions in April, but cases have since rebounded. Sharmila Devi reports.

How is it that Syria, targeted by war and economic siege, has had such striking success in controlling the COVID19 pandemic? With epidemics raging on either side — across Europe and all around the Persian Gulf — how did the embattled Syrian Arab Republic emerge (by mid-June) with so little damage, and indeed with the lowest number of cases and deaths in the entire Middle East region? | This was not due to luck, nor to a laissez-faire Swedish style practice, as some pandemic denier friends of Syria have reported. On the contrary, the Syrian government: (1) took the virus threat seriously, communicat…

Germán Gorraiz López (2020-06-20). Is Kashmir a US Trap to Confront Russia and China? globalresearch.ca The Shanghai Cooperation Organization (SCO), founded in 2001 by the Shanghai Five (China, Russia, Kazakhstan, Kyrgyzstan, Tajikistan) and to which Uzbekistan, India and Pakistan were later added would be the ALBA and Iran countries hard core of resistance to world …

yenisafak (2020-06-20). Top Pakistani diplomat hails Bozkir's UNGA presidency. yenisafak.com Pakistan's foreign minister on Saturday congratulated Turkey's Volkan Bozkir on his election as president of the next session of the United Nations General Assembly (UNGA)."On behalf of the people and government of Islamic Republic of Pakistan, I would like to extend my warm felicitation on your unanimous election by all member states as the President of the historic 75th Session of the UN General Assembly," Shah Mahmood Qureshi said in a letter.He said Bozkir's unanimous election reflects the international community's "trust and confidence" in his abilities to lead the UNGA "at this time of unprecedented global…

WSWS (2020-06-19). New wave of protests in Lebanon amid escalating economic crisis. wsws.org Washington is seeking to curb Iranian influence in the region and place maximum pressure on the Diab government, which is supported by Hezbollah.

Marco Carnelos (2020-06-19). Trump is hoping for an Iranian miracle. Tehran will not give him one. thealtworld.com 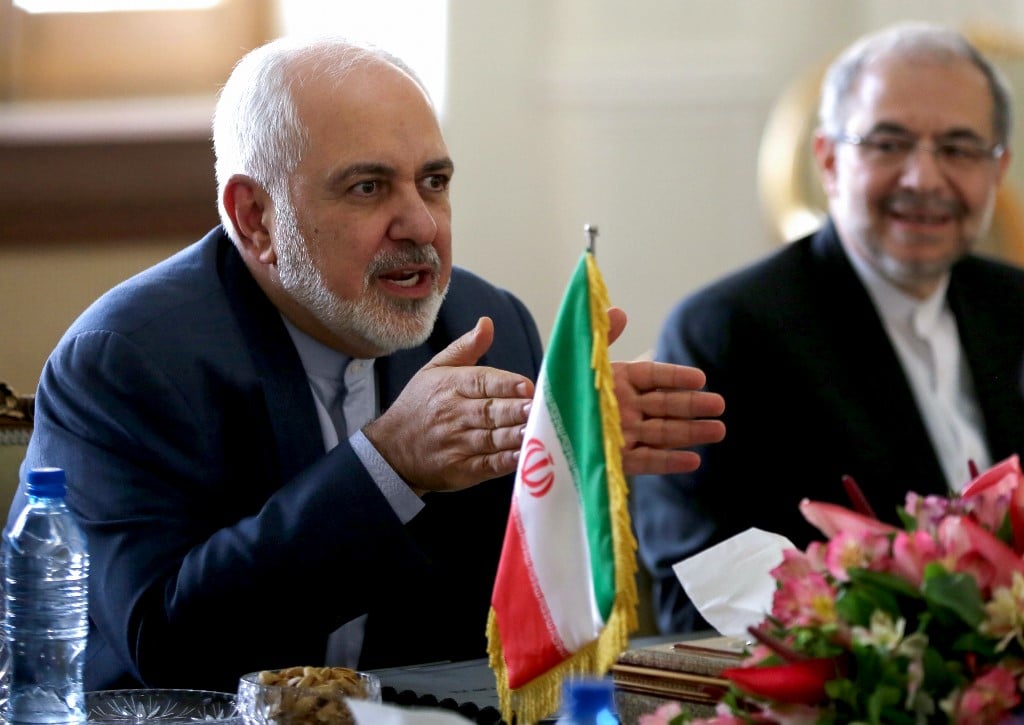 Chances are next to nil that Iran would make a new deal with the man who ordered the killing of Qassem Soleimani, the country's top general | US President Donald Trump is trying hard to recover from a sharp His attempt to hold China accountable f… If the Trump administration follows through on its threat to re-start nuclear tests, it will complete the unraveling of more than 50 years of arms control agreements, taking the world back to the days when school children practiced "duck and cover," and people built backyard bomb shelters.

teleSUR (2020-06-19). Iran to Reinforce Economic Ties With Syria Despite US Sanctions. telesurenglish.net Iran's Foreign Affairs Ministry spokesperson Abas Musavi Thursday condemned the new sanctions imposed by the United States against Syria and indicated that his nation will strengthen its economic relations with the Arab country. | RELATED: | "Iran does not validate unilateral sanctions and considers them expressions of the U.S. government's economic terrorism, which affects the people of Syria and seeks to destabil…

teleSUR (2020-06-19). UK, France, And Germany Refuse To Endorse US Sanctions on Iran. telesurenglish.net The UK, France, and Germany Friday stated that they would not support the U.S to unilaterally push for reimposing United Nations' sanctions against Iran. | RELATED: | As part of the Comprehensive Joint Action Plan (CJAP), Iran is subject to a UN weapons embargo, which will expire in October. Even when the U.S withdrew from CJAP in 2018, they seek to extend it. | In case the UN Security Council does not agree to the extension, the U.S threate…

WSWS (2020-06-19). Bolton account of Trump White House: Another volley in the conflict within the US ruling elite. wsws.org Press reviews indicate that Bolton's book attacks Trump entirely from the right, expressing particular bitterness that the administration did not go to war against Iran.

yenisafak (2020-06-19). Iran reports 120 more deaths related to coronavirus. yenisafak.com Iran on Friday confirmed 120 more fatalities from the novel coronavirus over the past 24 hours, bringing the nationwide death toll to 9,392.Health Ministry spokesman Sima Sadat Lari said a further 2,615 people tested positive for COVID-19, raising the overall count to 200,262.A total of 159,192 people have recovered and been discharged from hospitals so far, he said, adding that 2,833 remain at hospitals in critical conditions.Over 1.37 million tests have been conducted in the country to date, Lari said.Iran sees an upward trend in daily infections in many provinces, especially in the southwestern Khuzestan provi…

sputniknews (2020-06-19). Iran's Foreign Minister Zarif Urges E3 to 'State Publicly What They Admit Privately'. sputniknews.com The Joint Comprehensive Plan of Action, a treaty covering Iran's nuclear program, included seven countries and was signed in 2015, envisaging Tehran curbing its nuclear research programs in exchange for the lifting of economic sanctions. However, the decision by the Trump administration to leave the agreement in 2018 put the plan at risk.

en.mehrnews (2020-06-19). VIDEO: IRGC releases new video of downing US Global Hawk. en.mehrnews.com TEHRAN, Jun 19 (MNA) — On the occasion of the first anniversary of the downing of a US Navy MQ-4C Triton drone in June 2019 by Iran's military, the Islamic Revolution Guards Corps (IRGC) Aerospace Force has released a new video showing how the indigenous Khordad 3 air defense system downed the intruding spy drone.

en.mehrnews (2020-06-19). E3 to hold Iran talks in Berlin. en.mehrnews.com TEHRAN, Jun. 19 (MNA) — Britain, France and Germany are set to hold a meeting on Friday to discuss their strategy toward Iran after their anti-Iran resolution was approved by the Board of Governors of the International Atomic Energy Agency earlier today.

en.mehrnews (2020-06-19). Friday Prayers held in Ardabil after four months. en.mehrnews.com ARDABIL, Jun. 19 (MNA) — The first Friday Prayer ceremony of Ardabil, northwestern Iran, was held today after an almost four-months hiatus due to the outbreak of coronavirus. The religious event was held with all the issued health protocols in place.

en.mehrnews (2020-06-19). Iran to take appropriate action in response to IAEA resolution: Envoy. en.mehrnews.com TEHRAN, Jun. 19 (MNA) — Iran's permanent representative to international organizations in Vienna, Kazem Gharibabadi, has slammed the IAEA Board of Governors for adopting a resolution against Tehran, saying that the Islamic Republic will take "appropriate action" in response.