In January 2017, President Trump ordered the Department of Defense to conduct a Nuclear Posture Review. The document published a year later makes clear that the US possesses nuclear weapons, in part, so that "our diplomats continue to speak from a position of strength on matters of war and peace." The Nuclear Posture Review cites Russia as the evil menace against which the US must defend by renewing its nuclear stockpiles.

Peter Koenig (2020-06-07). Venezuela, Minneapolis, Iran, Europe — Trump's Last Gasps of Collapsing World Control. Or Is It? globalresearch.ca There comes a time when shooting around in circles just hits walls, bullets splinter off sidewalks, and shatter a window here and there. But people are in safety. They watch from a distance and with self-assurance. | Venezuela has received five …

Peter Koenig (2020-06-07). Venezuela, Minneapolis, Iran, Europe — Trump's Last Gasps of Collapsing World Control — Or is it? globalresearch.ca There comes a time when shooting around in circles just hits walls, bullets splinter off sidewalks, and shatter a window here and there. But people are in safety. They watch from a distance and with self-assurance. | Venezuela has received five …

ahtribune (2020-06-08). Syria: Will the Great Middle Eastern War Begin in the Levant? ahtribune.com

The world is in turmoil. 2020 has already brought major multiple crises, with the Iranian-American clash in Iraq which followed the US assassination of Major General Qassem Soleimani, and the COVID-19 health pandemic and economic disaster that struck all continents and stole the lives of over 400 thousand people around the world, costing tens of millions of jobs. None of this, however, prevented America from imposing even more sanctions on Iran, Syria and Venezuela. Iran — already under maximum sanctions since 1979 — sent five tankers to Venezuela to break the embargo on components and spare parts… 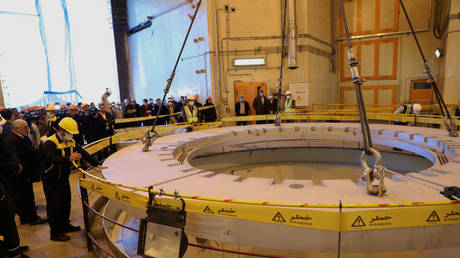 The coronavirus pandemic should not be an obstacle in fighting Iran, Israeli PM Benjamin Netanyahu said calling for harsh sanctions against Tehran after a critical report by the international nuclear watchdog. | The PM insisted that "coronavirus does not diminish our determination to act against Iranian aggression at all," vowing to do everything to prevent Iran from ever getting a nuclear weapon. | "Iran systematically violates its commitments by hiding sites, by enriching fissile materials and other violations," Netanyahu said as he opened a government meeting on Sunday. | He called on the international comm…

en.mehrnews (2020-06-09). All Iranian soldiers ready for self-sacrifice to preserve security. en.mehrnews.com TEHRAN, Jun. 09 (MNA) — Iranian Navy Commander Rear Admiral Hossein Khanzadi said that all soldiers of the Islamic Iran are ready to self-sacrifice themselves to establish security and repel global arrogance from the country especially in the maritime sector.

en.mehrnews (2020-06-09). Iranian coppersmith from North Khorasan. en.mehrnews.com TEHRAN, Jun. 10 (MNA) — June 10 is celebrated as World Handicraft Day worldwide. Iranian artists have used the occasion to draw international attention to Iran's unique art forms. Mr. Naghi Khorasani is a coppersmith (also known as a brazier) who makes artifacts from copper and brass (brass is an alloy of copper and zinc) for almost 20 years in the Iranian province of North Khorasan. His colleague Mr. Masoumian accompanies him by doing 'toreutics' (metal-engraving) on his crafts.

en.mehrnews (2020-06-09). Rouhani stresses expansion of economic coop. with Kyrgyzstan. en.mehrnews.com TEHRAN, Jun. 09 (MNA) — President Hassan Rouhani in a phone talk with his Kyrgyz counterpart, Sooronbay Jeenbekov, on Tuesday stressed the need for developing cooperation between Iran and Kyrgyzstan amid the novel coronavirus pandemic.

en.mehrnews (2020-06-09). MP calls on intelligence min. to pursue perpetrators of martyr Soleimani's assassination. en.mehrnews.com TEHRAN, Jun. 09 (MNA) — A member of Iranian Parliament in a letter penned to the intelligence minister called on him to submit a comprehensive report on the measures taken by the Ministry of Intelligence in connection with the assassination of martyr Lt. Gen. Qassem Soleimani by the US terrorist forces.

en.mehrnews (2020-06-08). Authority of Armed forces due to popularity: Ghalibaf. en.mehrnews.com TEHRAN, Jun. 08 (MNA) — Parliament Speaker Mohammad Bagher Ghalibaf said that popularity is the key to the victory and authority of Iran's Armed Forces.

en.mehrnews (2020-06-08). Sticking to JCPOA sole way to tackle nuclear issue: China. en.mehrnews.com TEHRAN, Jun. 08 (MNA) — China has criticized the US' policies toward the 2015 nuclear deal (JCPOA) as the main reason behind the nuclear crisis, saying that fulfilling commitments under the historic pact is the sole way to tackle the situation.

en.mehrnews (2020-06-07). Asalem-Khalkhal green road. en.mehrnews.com KHALKHAL, Jun. 08 (MNA) — The Almas pass located on Asalem-Khalkhal road, northwestern Iran, is one of the most beautiful communication routes in the country linking Gilan province to Ardabil. The side of the road is filled with young, sturdy trees and colorful flowers, as well as the flocks of ships and horses on the green slopes.

yenisafak (2020-06-08). Iran's death toll from coronavirus surpasses 8,350. yenisafak.com Iran on Monday confirmed 70 more fatalities from the novel coronavirus over the past 24 hours, bringing the nationwide death toll to 8,351. | A further 2,043 people tested positive for COVID-19, raising the overall count to 173,832, Health Ministry spokesman Kianoush Jahanpour said. | According to the spokesman, 136,360 people have recovered and been discharged from hospitals so far, while 2,619 patients remain in critical condition. | Some 1.1 million tests have been conducted in the country so far, according to the spokesman. | Iran sees an upward trend in daily infections in many provinces, especially in the s…

_____ (2020-06-09). The Rest Of The World Sees Uprisings, Not Riots. popularresistance.org U.S. officials, whether Democrat or Republican, pretend that only other countries violate human rights. Every year, the State Department issues a report on worldwide human rights with the heaviest criticism aimed at enemies du jour such as China, Russia, and Iran. | Human rights, as defined by U.S. officials, include freedom of the press, maintaining an independent judiciary, and civil rights. But most of the world, the United Nations included, goes further, saying human rights include the right to a job, health care, and housing, among other things. | Not surprisingly, U.S. leaders never mention authoritative in…

yenisafak (2020-06-07). Iran coronavirus deaths rise by 72 to 8,291. yenisafak.com Iran on Sunday confirmed 72 more fatalities from the novel coronavirus over the past 24 hours, bringing the nationwide death toll to 8,291.A further 2,364 people tested positive for COVID-19, raising the overall count to 171,789, Health Ministry spokesman Kianoush Jahanpour said.According to the spokesman, 134,349 people have recovered and been discharged from hospitals so far, while 2,596 patients remain in critical condition.Iran's daily number of COVID-19 cases dropped to around 800 in early May, but daily figures show an upward trend in recent days after authorities took measures to ease restrictions.Despite…

Abdel Bari Atwan (2020-06-06). What chance of pulling off a GCC reconciliation? thealtworld.com Trump is trying to get Saudi Arabia and the UAE to make up with Qatar, but only to rally them all against Iran | The feud within the Gulf Cooperation Council (GCC) has been brought back to pubic attention by US President Donald Trump's latest bid to ease it. He has reportedly been trying to persuade Saudi Arabia and Bahrain to re-open their airspace to Qatari airliners because its closure forces them to detour over Iran and earns the country a substantial income in over-flight fees. We haven't been told of details of these efforts, or whether they have made any headway. | The GCC crisis erupted in the summer of 2…

How BlackRock exploited the COVID-19 pandemic