Alan Robock (2020-10-21). An Open Letter to Biden: 5 Easy Steps to Reduce the Threat of Nuclear War. counterpunch.org Here is a letter I intend to mail in November. But I want you know about it now, to bring up an issue that is crucial to consider before you vote, and which has not received enough attention. Dear President-Elect Biden, I'm so happy that you were elected because in January you can start to

Mehr News Agency (2020-10-21). Pressure on Iran to continue regardless of election outcome. en.mehrnews.com TEHRAN, Oct. 21 (MNA) — The US Special Representative for Iran and Venezuela claimed that Washington's so-called 'maximum pressure' policy against Iran will continue regardless of the upcoming presidential elections.

Mehr News Agency (2020-10-21). Coronavirus cases climb toward a new peak in Iran. en.mehrnews.com TEHRAN, Oct. 21 (MNA) — The coronavirus outbreak has been worsening in Iran, as the number of infections, hospitalizations and fatalities due to the respiratory disease has been increasing in the past days.

Mehr News Agency (2020-10-21). Domestic defense systems destroy all hostile targets in drill. en.mehrnews.com TEHRAN, Oct. 21 (MNA) — A spokesman for a large-scale air defense war game in Iran said all of the flying objects designed to mirror capabilities of hostile targets were brought down by homegrown missile systems on the first day of the exercise.

yenisafak (2020-10-21). Medical staff struggle against coronavirus in Iran. yenisafak.com Healthcare workers in Iran are struggling against the novel coronavirus as the country has seen a rising trend in infections and deaths in October. | A total of 164 Iranian medical personnel have died due to COVID-19, Iranian Health Minister Saeed Namaki said in a statement on Aug.22. | Since late August, a large number of health workers have tested positive for the coronavirus, while many others lost their lives due to the pandemic. | In Iran, especially in the capital Tehran, hospitals allocated to COVID-19 patients have reached their maximum capacity. Therefore, newly diagnosed patients are treated at their ho…

Aaron Maté (2020-10-20). Chomsky: from nuclear weapons to Iran, Trump's worst threats are dangerously ignored. thegrayzone.com Noam Chomsky warns that the Trump administration poses a unique threat to humanity, and its most reckless policies are receiving far too little attention. Noam Chomsky discusses the White House's threats to the New START treaty, the last remaining accord limiting the US and Russia's nuclear weapons arsenals; its latest round of crippling sanctions and threats against Iran; the bipartisan US refusal to accept a Middle East Nuclear-Weapon-Free Zone, which would terminate Israel's nuclear weapons program; and the silencing of …

Andrew Korybko (2020-10-20). The Expiry of The Iranian Arms Embargo. globalresearch.ca The 13-year-long anti-Iranian arms embargo expired on the 18th of October, which creates opportunities for the Islamic Republic to strengthen its national defense capabilities and cultivate even deeper relations with its top strategic partners such as China and Russia, possibly … 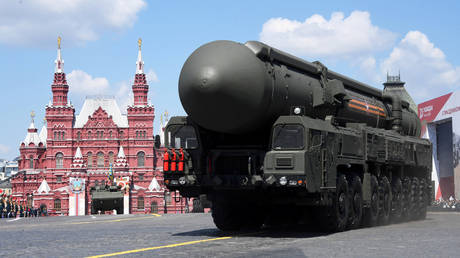 The sole remaining US-Russia nuclear arms control deal may get a last-moment extension after all, but everything now depends on what the US State Department means when it says warhead caps need to be "verifiable." | New START (Strategic Arms Reduction Treaty) is scheduled to expire in February 2021. While Russia has offered a "clean" renewal of the existing treaty, without preconditions, the Trump administration has first sought to expand it to include China, then demanded a limit on total nuclear warheads as a condition for agreeing to an extension. | The Russian Foreign Ministry said on Tuesday that Russia i…

_____ (2020-10-20). Instability, Poverty and Nuclear Weapons. strategic-culture.org The President of the United States has the power to fire off thousands of nuclear weapons and destroy the world. As succinctly This is the Trump who contracted the Covid 19 virus and on October 2 was tak…

Mehr News Agency (2020-10-20). Muslims not to accept disdain of compromising with Zionists. en.mehrnews.com TEHRAN, Oct. 21 (MNA) — Leader of the Islamic Revolution Ayatollah Seyyed Ali Khamenei said that Muslim nations will not accept the humiliation of compromising with the Zionist regime in any way.

yenisafak (2020-10-20). Iran reports record 5,039 new daily COVID-19 cases. yenisafak.com Iran's health ministry on Tuesday reported 5,039 new coronavirus infections in the previous 24 hours, the highest ever daily tally, pushing the national total to 539,670.Ministry spokeswoman Sima Sadat Lari told state TV that 322 people had died from the disease in the previous 24 hours, bringing the official death toll to 31,034 in Iran, one of the worst-hit countries in the Middle East.

Andrew Korybko (2020-10-19). The Expiration Of The Iranian Arms Embargo Opens Up Exciting Opportunities. thealtworld.com The 13-year-long anti-Iranian arms embargo expired on Sunday, which creates exciting opportunities for the Islamic Republic to strengthen its national defense capabilities and cultivate even deeper relations with its top strategic partners such as China and Russia, possibly even playing them off against one another in a "friendly competition" so as to derive the greatest benefit. | The End Of The Embargo | The US is enraged that the UN let the 13-year-long anti-Iranian arms embargo Iran hits out at 'fearful' US after UN arms embargo expires | Tehran continues its war of words with Washington after Mike Pompeo threatened to sanction those doing arms deals with Iran now that a UN embargo has ended | Mon, 10/19/2020 – 16: 18 | Iranians visit a weaponry and military equipment exhibition in the capital Tehran in February 2019 (AFP/File photo) | Iran hit out at the United States on Monday afte…

Raul Diego (2020-10-19). With an Eye on Nearby Iran, Israeli Weapons Fuel the Violence in Azerbaijan. mintpressnews.com Hoping to profit, protect an important source of oil, and to antagonize nearby Iran, Israel is selling drones and weapons to Azerbaijan, fueling the conflict in Nagorno-Karabakh.

Yonat Shimron (2020-10-19). Catholic Priest Is Sentenced to Time Served after 2018 Break-in at Nuclear Naval Base. globalresearch.ca Since his arrest nearly three years ago on trespassing charges after invading a nuclear submarine base with six others as part of a symbolic nuclear disarmament action, the Rev. Stephen M. Kelly has been held in a Brunswick, Georgia, county …

Mehr News Agency (2020-10-19). Iran-Syria keen of development of trade transactions. en.mehrnews.com TEHRAN, Oct. 20 (MNA) — In a Monday meeting with the Syrian envoy to Tehran, the ICIAMA head said the implementation of the free trade agreement between Iran and Syria will bring good days in mutual trade, which is what the two countries want.

Mehr News Agency (2020-10-19). Iran records highest coronavirus daily death toll again. en.mehrnews.com TEHRAN, Oct. 19 (MNA) — Deaths from the coronavirus pandemic in Iran hit a high record on Monday as 337 new deaths were registered over the past 24 hours, the highest since the virus outbreak in the country.

Mehr News Agency (2020-10-19). Russia's policy not determined by US threats: Ulyanov. en.mehrnews.com TEHRAN, Oct. 19 (MNA) — In reaction to the US threat in the event of any arms deal with Iran, Russian senior diplomat said that Washington's threats are not determining Moscow's policy.

Mehr News Agency (2020-10-19). Police seize over 2 ton of illicit drug in S Iran. en.mehrnews.com TEHRAN, Oct. 19 (MNA) — The deputy police chief of Sistan and Baluchestan announced over the seizure of a total of 2 tons and 214,327 kg of various drugs during 2 separate operations in the cities of Saravan, Sib, and Soran in Sistan and Baluchestan.

sputniknews (2020-10-19). US Iran-Related Sanctions on Chinese Entities 'Wrong Approach', Russian Envoy to UN Says. sputniknews.com UNITED NATIONS (Sputnik) – The United States' approach to impose sanctions on Chinese and Hong Kong individuals and entities in relation to Iran's nuclear program is wrong and Russia will continue to do business with the Islamic Republic, Russian Deputy Permanent Representative to the United Nations Dmitry Polyanskiy said in a statement.

yenisafak (2020-10-19). Iran plots course after end of 13-year arms embargo. yenisafak.com A 13-year UN-mandated arms embargo on Iran officially expired Sunday, effectively paving the way for the sanctions-battered country to import and export conventional weapons.In a statement, Iran's Foreign Ministry called it a "momentous day for the international community," which it said has protected the UN Security Council Resolution 2231 and the 2015 nuclear deal."As of today, all restrictions on the transfer of arms, related activities and financial services to and from the Islamic Republic of Iran, and all prohibitions regarding the entry into or transit through territories of the UN member states previously…

_____ (2020-10-18). 'Distraction Mechanism': NYT's Crocodile Tears Over Iran Sanctions. popularresistance.org What seems to be a compassionate plea for mercy from Washington by a major US newspaper is actually just a furthering of the US propaganda war against Iran that's responsible for the strangling sanctions that frustrate its ability to combat the COVID-19 pandemic, a doctor and activist told Sputnik. | An op-ed by the New York Times Editorial Board on Tuesday urged: "Iran's Covid-19 Death Toll Is Rising. Show Mercy, Mr. Trump." However, while the article noted the extensive and deliberate damage US President Donald Trump's "maximum pressure" policies toward Tehran have had…