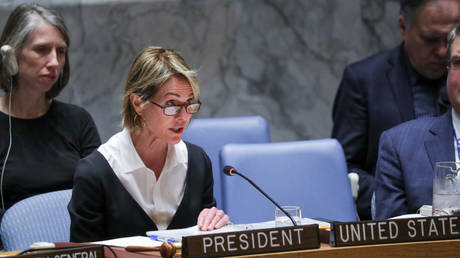 Ambassador Kelly Craft's effort to beautify a US push to trigger the return of UN sanctions on Iran and frame the move in humanitarian terms was met with mockery as observers contrasted her statement with Washington's actions. | "The United States will not abandon the people of Iran or the region," Craft said Tuesday on Twitter, in support of a US request to "snap back" sanctions on Iran. "We will never allow Iran, the world's No. 1 state sponsor of terrorism, to freely buy and sell weapons of war," she said, and accused other UN Security Council members who do not support US efforts of standing "in the compan…

Mehr News Agency (2020-08-25). US police brutality stems from racist way of thinking: Veep. en.mehrnews.com TEHRAN, Aug. 25 (MNA) — Iran's First Vice-President on Tue. blasted US police for its brutalities against the American people and said that US' police behavior is the outcome of domination of racist thoughts in that country.

Mehr News Agency (2020-08-25). IAEA vows to fulfill obligations responsibly despite pressure. en.mehrnews.com TEHRAN, Aug. 25 (MNA) — The head of the UN nuclear watchdog stressed that his organization will carry out its commitments regrading Iran responsibly and independently, despite some pressures.

sputniknews (2020-08-25). Iran Blasts Pompeo for Trying to 'Flood Region With US Weapons' Amid Talk of More Arms for UAE. sputniknews.com US Secretary of State Mike Pompeo met with Israeli Prime Minister Benjamin Netanyahu on Monday, where he promised to "continue to honour" the US commitment to ensure Israel's "qualitative military edge" against its neighbours. Pompeo made the comments amid reports that the US is looking to sell F-35 fighter jets to the United Arab Emirates.

yenisafak (2020-08-25). Iran, IAEA agree to 'open new chapter of cooperation'. yenisafak.com The director-general of the International Atomic Energy Agency (IAEA), Rafael Grossi, held wide-ranging talks with Iran's nuclear chief Ali Akbar Salehi in Tehran on Tuesday and both agreed to open "a new chapter of cooperation". | Grossi arrived in Tehran late on Monday on a two-day visit to discuss the issue of granting IAEA inspectors access to two Iranian nuclear sites. | He is expected to meet with top Iranian officials, including President Hassan Rouhani and Foreign Minister Javad Zarif, officials said. | The standoff between the UN nuclear watchdog and Tehran has intensified in recent months after the IAEA… Mehr News Agency (2020-08-24). No deal can legitimize the Zionist regime: Khaled al- Qaddumi. en.mehrnews.com TEHRAN, Aug. 24 (MNA)— Hamas' Representative in Iran said that the Israeli regime still is in intense need of recognition by minor countries in the region despite support from super powers, the UN secretary-general and Europeans.

sputniknews (2020-08-24). Watch Iran's Defence Minister Get Acquainted With S-400 During Arms Expo in Russia. sputniknews.com With the United Nations arms embargo on Iran set to expire in October, US officials and media have speculated that Tehran may buy Russian military hardware, including the S-400, once restrictions run out. Iran already has some advanced air defence capabilities of its own, including a system which downed a $220 million US drone in 2019.

sputniknews (2020-08-24). Analysis of Black Boxes Reveals Downed Ukraine Jet Struck by Iranian Missiles 25 Seconds Apart. sputniknews.com Analysis of the black boxes of the Ukrainian passenger plane downed on January 8 by Iranian forces shows that it was hit by two missiles 25 seconds apart and that passengers were alive for some time following the first blast, Iran's Civil Aviation Organization revealed on Sunday.

Mehr News Agency (2020-08-23). Iran-Venezuela trade coop. going ahead despite US sanctions. en.mehrnews.com TEHRAN, Aug. 23 (MNA) — The Embassy of the Islamic Republic of Iran to Venezuela announced the finalization of trade agreements with the Bolivarian country of Venezuela despite US sanctions imposed against the two countries.

Mehr News Agency (2020-08-23). US resort to snapback is out of 'frustration': ex-diplomat. en.mehrnews.com TEHRAN, Aug. 23 (MNA) — A former Iranian diplomat notes that the US resort to JCPOA provisions is due to their frustration and doomed to failure.

Mehr News Agency (2020-08-23). Iran defense industry progresses at IntI. level : MP. en.mehrnews.com TEHRAN, Aug. 23 (MNA) — A lawmaker said with the efforts of Iranian elites the Defense Ministry has gone through reverse engineering of military equipment and today Iran is among the top 10 countries in the world regarding the defense industry.