Staff (2021-07-26). Delta Strain Detected in Venezuela's Simón Bolívar Airport—7+7 Reopening Plan Continues. orinocotribune.com On Sunday, July 25, President Nicolás Maduro reported the detection of two cases of the Delta strain: "In Venezuela we already have two cases of the Delta strain: an athlete who came to Miranda from Turkey, and the second case of a doctor who lives in Caracas. He came from abroad. Both people are vaccinated." | He mentioned the study about lifting the 7+7 reopening scheme and highlighted that the country is facing a new threat with the Delta and Delta Plus variants. He explained that in Colombia they realized last Saturday that the Delta strain was detected a month and a half ago. | "In Venezuela, without a doubt…

Peoples Dispatch (2021-07-26). Iraq seeks timeline for US troop withdrawal from the country. peoplesdispatch.org There is increasing pressure on the Iraqi government to act on the presence of foreign troops in the country, particularly since the assassination of Iranian general Qassem Soleimani by the US last year…

teleSUR (2021-07-26). Venezuela Confirms Two Cases of Delta COVID-19 Strain. telesurenglish.net On Sunday, Venezuela's President Nicolas Maduro confirmed the highly contagious Delta COVID-19 strain in the Southern nation after two travelers that came from abroad tested positive for it. Both citizens are isolated and receiving treatment. | RELATED: | The first case was a sportsman who arrived in Miranda state from Turkey. The athlete had verified contact with 30 people that have so far tested negative to COVID… Click to see full-size image | On July 26th, US President Joe Biden will host Iraqi Prime Minister Mustafa al-Kadhimi. | This is the latest step in weeks of "strategic dialogue" over the future of US troops in Iraq, attacks by Iran-aligned groups, and fears of a resurgence of ISIS. | At the top of the agenda for al-Kadhimi, the former director of the Iraqi National Intelligence Service who became prime minister in May 2020, will be attaining a final timeline for the withdrawal of US "combat" troops, a category that t… 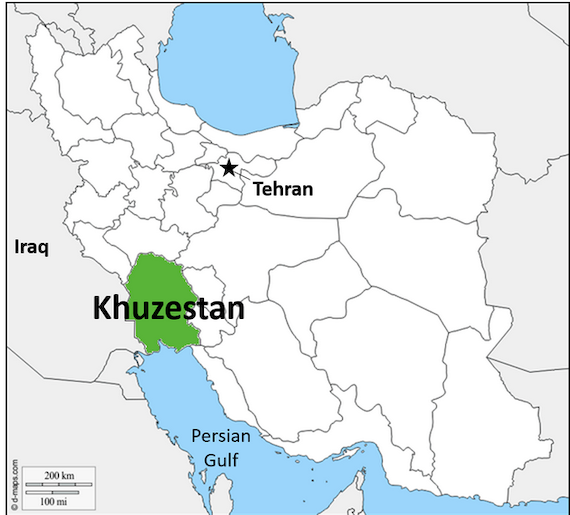 Ann Arbor (Informed Comment) — Iran's southwestern Khuzestan region, the center of its petroleum industry, has been wracked with protests for a week, in part over water shortages. Rallies have erupted in the towns of Mahshahr, Izeh, Ahvaz, Kut-e Abdollah, Susangerd, Aligoudarz and Shoushtar, according to Amnesty International The Iranian government has sometimes replied to …

Elijah Magnier (2021-07-25). The US has Attacked All Pragmatic Iranian Governments: No Nuclear Deal Soon. thealtworld.com Iran is no longer in a hurry to conclude a nuclear deal with the US, and it has not budged an inch from its position. | It is unclear whether it is former President Donald Trump's administration that pushed Iran to intransigence or whether all US administrations have been sincere in their goals to bring the Islamic Republic under the US's hegemony at all costs. Certainly, current President Joe Biden does not want to return to the 2015 agreement signed by President Barack Obama. President Biden does not want to lift all the sanctions on Iran imposed by his predecessor Trump and so refuses to approve the nuclear ag…

Ann Arbor (Informed Comment) — Iran's southwestern Khuzestan region, the center of its petroleum industry, has been wracked with protests for a week, in part over water shortages. Rallies have erupted in the towns of Mahshahr, Izeh, Ahvaz, Kut-e Abdollah, Susangerd, Aligoudarz and Shoushtar, according to Amnesty International The Iranian government has sometimes replied to …

Zahra Mirzafarjouyan (2021-07-25). Maduro orders military to respond to any US aggression. en.mehrnews.com Following the violation of Venezuela's airspace by a US military jet, Venezuelan President Nicolas Maduro has ordered the country's military to remain alert and respond forcefully to any act of aggression.

ecns.cn (2021-07-25). Time to investigate Fort Detrick. ecns.cn Amid a surge in confirmed COVID-19 cases in the United States, some U.S. politicians have continued to wantonly preach the so-called second phase study into the origin of the coronavirus in China rather than focusing on fighting the virus and saving lives in their own country.

ecns.cn (2021-07-25). China hopes WHO can uphold integrity of COVID-19 origin tracing: spokesperson. ecns.cn China hopes that the World Health Organization (WHO) can adhere to the spirit of science, professionalism and objectivity and work with the international community to jointly uphold the scientific integrity of studying the origins of COVID-19, resist the headwind of politicization and safeguard the sound atmosphere of global anti-epidemic cooperation, Foreign Ministry spokesperson Zhao Lijian said Friday.

ecns.cn (2021-07-25). Origin tracing must be done in U.S.: China Daily editorial. ecns.cn It would be inaccurate to interpret a Chinese Foreign Ministry spokesman's remarks on Monday regarding the proposed second-phase novel coronavirus origin tracing by the World Health Organization in China as outright refusal, because in his words, "relevant experts on the Chinese side are studying it carefully".

ecns.cn (2021-07-25). China refutes U.S. accusations on next stage of origin tracing. ecns.cn China on Friday refuted accusations from the United States to the effect that China's stance on the next stage of the global origin-tracing issue was "irresponsible and dangerous", replying that the U.S. side has been extremely irresponsible and shameful in its behavior toward its own people and the international community.

Kamal Iranidoost (2021-07-24). Afghan government imposes curfews in 31 provinces. en.mehrnews.com Afghanistan ministry of interior affairs said that people in 31 provinces will not be allowed to get out of their homes from 10pm to 4am except for emergency, Afghan local media have reported. Seyyed Ahmad Qureshi, source: Tasnim News Agency. | On July 23, the Iranian Revolutionary Guard Corps (IRGC) mourned Seyyed Ahmad Qureshi, a prominent commander of the Quds Force. | According to Iranian sources, Qureshi died of wounds that he sustained while fighting in Syria. The sources did not reveal when or how the commander was wounded. | Qureshi served as a military advisor in Syria for more than eight years. He reportedly commanded a unit of the Afghan Liwa Fatemiyoun, which has been fighting ISI…